It’s inevitable to have disagreements when you’re running a business. People come to the table with different perspectives and backgrounds. It’s natural for people to disagree.

Yet, it’s still difficult to gather varying perspectives and come to a conclusion as a team. How do you make clear, aligned decisions while making sure disagreements are heard and handled?

I was listening to Dustin Moskovitz, Co-Founder and CEO of Asana, talk about this topic in a podcast interview. He says he used to take things personally when people disagreed with him. He’d often get emotional, and disagreements often became conflicts.

He’s learned over his experience that if we have disagreements, that means there is a difference in the assumptions we’re making somewhere. To handle disagreements, all you need to do is sit down with the other person and try to lay out all the assumptions. And instead of arguing over who’s right and who’s wrong, decompose the problem, analyze and figure out where the assumptions diverge. Once you align on the assumptions and see the situation with an aligned lens, you’ll have much more objectivity and clarity, leaving emotions out of the debate.

Since each of us views the world so differently, there’s no reason to argue about who’s wrong and who’s right. The only discussion that matters is to talk about where we have our differences and how we objectively align for decision-making’s sake.

Instead of getting into heated debates that aren’t going anywhere, we can focus on sorting out the assumptions we’re making and align on those assumptions so we could come to a unified conclusion.

If we all get into the habit of identifying the differences in the assumptions we have in a topic, we can reach conclusions much faster. Decisions are progress, debates aren’t. 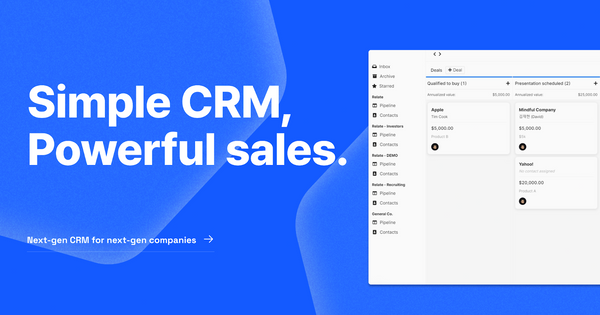 This brings Relate's funding to date to $2.15m from Bass Investment, Translink Investment, N Partners, and Bon Angels.
“The future is much like the present, only longer.”
Justin Kan, the founder of Twitch which sold for $900M to Amazon in 2014, recently shared his story of now shut-down legal tech company Atrium.